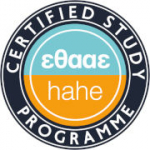 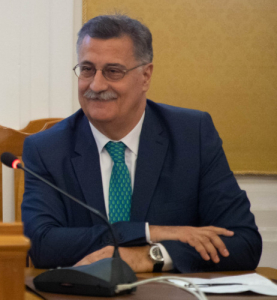 We welcome you to the website of the Mediterranean Studies Department at the University of the Aegean.

The Department of Mediterranean Studies of the University of the Aegean, based in the beautiful city of Rhodes, has completed more than twenty years of existence and was recently evaluated with excellent comments. It is located in the superb facilities of the University of the Aegean, in the center of the city of Rhodes, in front of the walls of the famous Medieval City.

It stands out, as the only Department of Mediterranean Studies in Greece and one of the few in the World. It moves within two concentric circles. The first circle includes the historical relationship between Greece and the Mediterranean area, and the second circle monitors the developments in the European Union and the international community. Also, through its many activities, the Department of Mediterranean Studies is connected both to the Rhodian society and the wider region of the South Aegean.

The distinct and dynamic character of our Department is a confirmed result of its uniqueness but also of its people, namely its teaching staff, its dedicated and experienced administrative personnel, our undergraduate and postgraduate students, our external associates and our alumni.

The Department of Mediterranean Studies, with its contemporary Interdisciplinary Program of Studies, always updated according to the new data in the fields of its study, aspires to provide its undergraduate and postgraduate students with the necessary skills in order for them to walk into a constantly changing future, a future which is rapidly forming and even more rapidly reforming.

In the face of new challenges and prospects, together, we will continue and achieve even more.

The Department of Mediterranean Studies

The Department of Mediterranean Studies (DMS) was founded in 1997 and began its operation in the academic year 1999-2000. It is part of the School of Humanities of the University of the Aegean, together with the Department of Primary Education and the Department of Pre-school Education and Educational Design. The School of Humanities is housed in two big renovated buildings next to the Medieval Town of Rhodes, which have classrooms, laboratories, libraries and instructors’ offices. More information about the University of Aegean and its Schools/Departments is available at the website: https://www.aegean.gr.

The mission of the DMS, as it is generally stated in the Presidential Decree 316 (Gazette Issue 223, 4/11/97) is “to develop and promote the knowledge about the language, ancient and modern history, ancient civilization, economic and political structures of the Mediterranean countries, with particular emphasis on the south and south-eastern part of the Mediterranean area”. In the first two years of study (1st-4th semester) the courses are common for all students of the DMS and are divided into compulsory and optional ones. The study, teaching and research of these issues, which were attempted for the first time in an academic department of Greece, have given a unique and innovative character to the DMS. In the beginning of the fifth semester of study all students are required to choose one of the following three scientific divisions:

The Department has six Laboratories:

The DMS conducts innovative research in all the sub-fields it specializes in, so as to offer high-quality studies to its students. Moreover, the studies offered by the DMS have a modern, dynamic and competitive character that provide to its graduates a strong scientific profile as opposed to other specialists (archeologists, linguists, international relations’ scientists) that come from equivalent departments. The students of the DMS are initiated to the importance of research activity through which scientists become acknowledged by publishing their work to high level scientific editions and journals. Students are also encouraged to marginalize mediocrity and to develop their critical skills, in order to be able to achieve the “optimal” outputs. In general, the DMS seeks to foster a spirit of modern tendencies and pioneering studies, focusing on training activities and expanding scientific horizons, challenging punditry and searching for empirically tested points of view. In today’s globalized world, the DMS aims at educating scientific personnel that will manage to effectively deal with the rapidly expanding and changing technological environment. The high demands, as there are nowadays established in the geopolitical and the international economical level, call for interdisciplinary and insightful executives who will contribute to Mediterranean region development, especially in the fields of international economics, politics and diplomacy, languages, literature and the civilization of the South-Eastern Mediterranean region, as well as to the communication among different cultures.